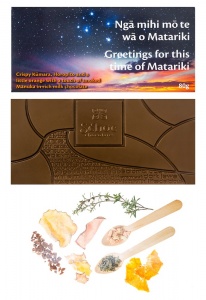 Crispy Kūmara, Horopito and a little orange with a touch of smoked Mānuka in rich milk chocolate.

When the Matariki stars appear in the dawn sky, it is a sign for the people to gather, plan for the future and honour their dead.

Depending on where they are in NZ, Matariki indicates to some people it is the time to plant winter crops such as kumara which is why we have included it in this chocolate. Families gather around bonfires just before dawn to watch for the Matariki stars to appear. It is said that the steam from the food cooked on the fire rises to feed the Matariki stars. So, a touch of smoked manuka, with a hint of dried horopito tips has also been added to this chocolate to spice up the morning.

Some also believe that if the stars appear close together and hazy, the Winter will be bitter and the crops will be poor. If the star cluster appears bright and widely spaced, the coming season will be warm and food will be plentiful.

But whatever your belief, Matariki is a good time to reflect and to make plans for the future.

Hope you enjoy it.